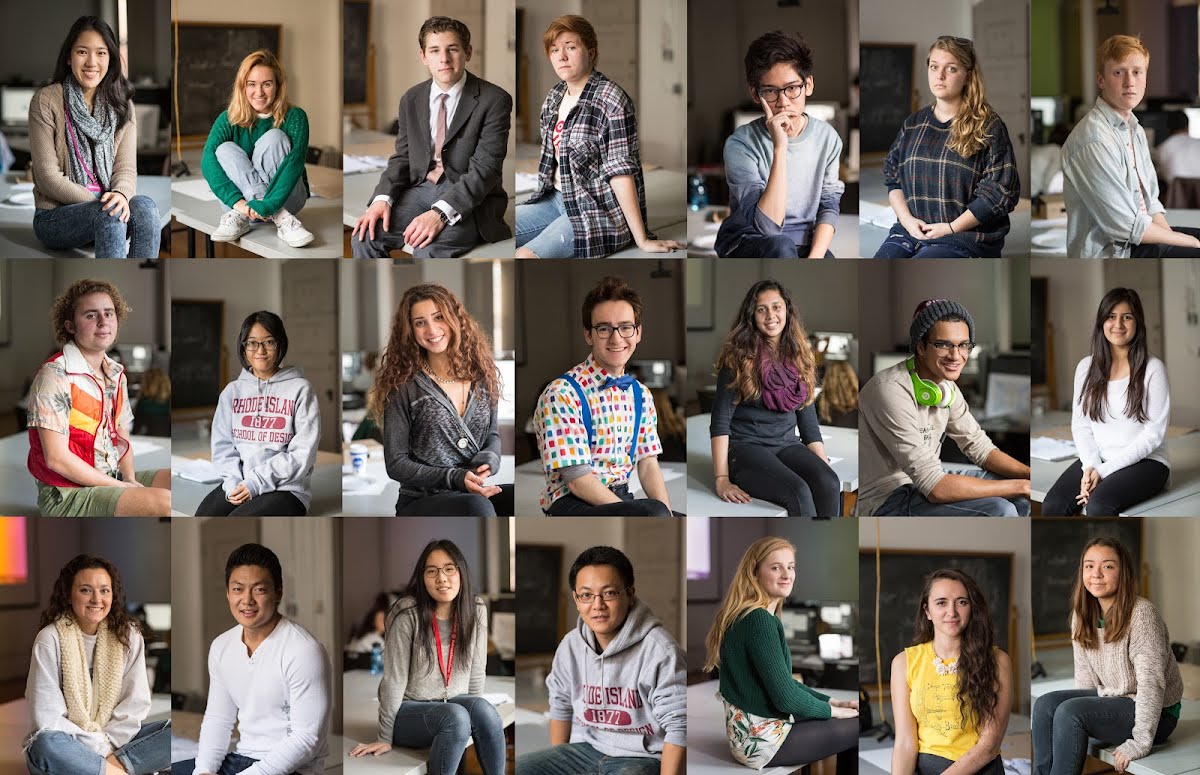 When they arrived at RISD as first-year students in the fall of 2014 they were 21 strangers. But randomly grouped together in the 16th of 20 Experimental and Foundation Studies (EFS) sections, they embarked on all of their first-semester studio courses (Drawing, Design and Spatial Dynamics) together, tackling assignments, mastering skills, collaborating on projects and participating in critiques. Their days, evenings and weekends were spent working side by side in the studio.

Now in their senior year, these students have been busy exploring what RISD has to offer: they’ve selected majors and chosen liberal arts concentrations. They’re studying abroad in places like Japan and Italy, playing on The Balls (RISD’s basketball team) and working at Carr Haus, the campus coffee shop. They’re representing their peers in student government, performing in plays, editing zines and taking Chinese up the hill at Brown University. They come from all over—Turkey, Ohio, Tasmania, Canada, California, New Jersey and Thailand—and are eager to use their creativity to make RISD and the world a better place.

While this group is unique, the breadth of their experience is representative of every EFS section—students branching out to explore new possibilities while maintaining the friendships they made during their first semester. From Section 16 to the cusp of graduation, they're each experiencing the transformative effect of a RISD education in their own way.

Here’s a glimpse at how they've grown.

Vaughan “We played with color, ink, movement and restriction. The project wasn’t ultimately successful, but I can look back and realize what we did well and what could’ve been done better. I learned a lot from this: rather than judging yourself negatively, you should always be revising.”

Poornima “Tika is a gesture you receive before or after praying in the Hindu culture. I recreated the gesture on a 52-yard roll of tracing paper first, then made a video in the same studio space, trying to create a stronger spiritual relationship to the environment. The assignment was tranquilizing; it helped me build a deeper connection to my religion.”

Dennis “I definitely overdecorated but I think it added coziness to the room. My roommate's opposing wall featured a single 8.5 x 11” drawing in charcoal. Despite being so different, we actually complemented each other well and I think he lowkey-enjoyed the leopard print rug.”

Kathryn “I’ve worked at Carr Haus since my first year. The register is arguably the easiest shift, but my favorite job is making coffee drinks.”

Shivangi “When I came to RISD I never would have dreamed I’d eventually be a Furniture Design major, but the EFS egg project was an introduction to wood for me.”

Henry “It was always helpful to do a process critique before assignments were due. Drawing was super intense and also one of the best studio classes I've had. Some people would pull all-nighters. It was emotionally taxing, but it taught me about the language of critique and how to work hard.”

Yasemin “I loved this class. Our teacher Stefanie Pender is a very innovative glass artist. We typically used a setup with minimal lighting because she liked using light to ‘paint’ on objects.”

Joanna “The pile drawing is famous among Norm Paris’ students because it's monumental—literally and metaphorically. Around midterm, we had to make something small—a little sculpture that could be transported to and from studio—and over time turn it into something sublime using at least two of the biggest sheets of paper that the risd:store sells. Norm showed us Géricault's The Raft of Medusa for inspiration.”

Felix “Even though I was super scared about my role as Noble the Lion, in the end I thought it was great because I got to dress fancy and act really snooty. I delivered a monologue about how amazing I was and how I was the smartest animal of all.”

Dennis “I served as treasurer my sophomore year. We addressed students’ questions regarding health services, registration for classes, Wintersession and other issues. My other really fun responsibility was ordering the food for our meetings every week.”

Henry “Engraving has been practiced since the Middle Ages. I try to use it to tell stories... I want to make the medium interesting to a new audience. The process takes forever—usually I listen to a podcast or rap album to stay entertained—but the result can’t be reproduced any other way.”

Katie “I worked with Chantal Feitosa, a classmate of mine in FAV. We each made a character (mine was a little boy in a bathtub) and worked together to create the set. The central theme was my grandma is cooler than yours.”

Shawn “I've been on the team for three years now and am planning on playing next year too. I've made some really good friends. We bring our on-court chemistry to our lives outside studio and organize team-bonding dinners, parties and activities.”

Dennis “We could only rely on bent wood lamination and wood glue—no nails or screws—to make a structure capable of supporting a plant 15 inches off the ground. The worst (or maybe the best?) part of the assignment was that we had just a week to finish it.”

Yasemin “Sometimes you feel lonely—not because you don't have friends around, but because of something that has to do with your story. At the rally, people shared all sorts of thoughts and experiences in public without the influence of any hierarchy or power structure. It was freezing out, but I felt so warm inside.”

Henry “My good friend Connor has a Risograph printer so we curated and printed an anthology of student comics to give out around campus. I want to grow the do-it-yourself print culture at RISD and encourage people to make their own low-cost zines.”

Kathryn “The first large-scale thing I made was for my midterm project: a 7 x 4’ tapestry that emulated a soft, maplike world. I wanted to refer to childhood, tactility and fantasy.”

Mei “2nd Life is RISD’s upcycling art supply store in downtown Providence. Around the holiday season, someone donated a lot of their grandmother's vintage ephemera, which led to our ’Tis the Season display.”

Mei“Your thinking changes a lot year to year, and so do your set-in-stone ideas. For me the Computation, Technology + Culture concentration has been a kind of self-imposed goal, a restriction to work in. I'm choosing to focus on what feels especially culturally relevant to me.”

Na “I traveled with a Wintersession group to Italy. We visited Turin, Bologna, Florence and San Miniato and spent the final week making leather shoes by hand. Mine were inspired by a prosciutto and pineapple dish—it was the best meal I had during the trip.”

Na “On the trip I used a sketchbook to document what inspired me—my favorite objects and scenes—and some of those drawings led to my final shoe design. The scenery in San Miniato, a very small town in Tuscany, was fantastic. I was very drawn to the patterns and textures I found inside Santa Chiara, where we stayed.”

Kathryn “Felix and I both worked open studios. I was in the dye lab doing demos and showing examples. During our break we went to the alumni sale and got to meet the amazing RISD alum Lindsay Degen.”

Shivangi “I made this jaali—a woven screen—for my final project. All the pieces are made through the process of bent lamination and then are woven together. It's influenced by a very detailed look at a basic weave. As a starting point, it's been a great influence on what has now become my senior project. The jaali acted as a scale model for what could be an architectural space divider.”

Joanna “In my first year I was quick to say I got a ‘bad’ crit when my classmates pointed out things I could have done better. But recently I realized that as long as people aren't telling you how to make your work, there's no such a thing as a ‘bad’ critique. It's important to listen to the immediate reactions people have when they see something for the first time.”

Vaughan “I’ve learned to take time to consider the texture of the garment...to find the feel, find the reasoning, analyze the material. You’ve got to pay attention to what your classmates and teachers are saying, but trust yourself too.”

Zoë “I've realized how valuable it is to take time to explore. Sometimes at RISD, when you have a lot of work, it can be hard to venture out. But I feel much more inspired when I take the time to relax, find new places and have new experiences. I know this inspiration will continue through my senior year—I want to continue to take in Providence.”

Katie “Hannah and I have a plan to form a stop motion animation studio after a few years of working in the industry. We've done internships both together and apart at different studios, and decided the company we really want to spend our time with doesn't exist yet.”

Michael “At first I didn't really know what I wanted out of RISD—just that I wanted to go into industrial design. Once I was in the department, I realized that industrial design also has many sub-categories and it was like first year all over again. But through taking a variety of major and non-major classes, I've gotten a better understanding of what I want to do after school. Some people know exactly what they want to do, while others, like me, discover their path over four years.”

Yasemin “I started working in the Nature Lab. It's been my favorite job on campus, to the point that it doesn't feel like a job at times because I am engaging with living organisms. In general these days, I am thinking of places to travel after school. I think the nomadic life I am longing for is about to begin.”

Kendra “The city has such a dynamic energy and so did Method's creative environment. In many ways it translated to a steep learning curve both socially and professionally—but that was what I found so enriching about the experience. The best way to widen your comfort zone is to keep stepping out of it.”

Dennis “Chinese is the most widely spoken language on the planet. I hope to use it to connect with creators outside of the western hemisphere, to break into the larger design world.”

Emily “We met on the first day of Norm Paris' drawing class. I've lived with Zoë for two years (but basically since our first year because she always fell asleep on my floor) and Kathryn and I magically end up in the same place at the same time, whether it be our major or studio classes or city or apartment. Four years ago, I never would have thought that I would be strangely obsessed with knit structures or living in New York with my best friends for a summer, but mostly I can't believe that my hair is this long!” 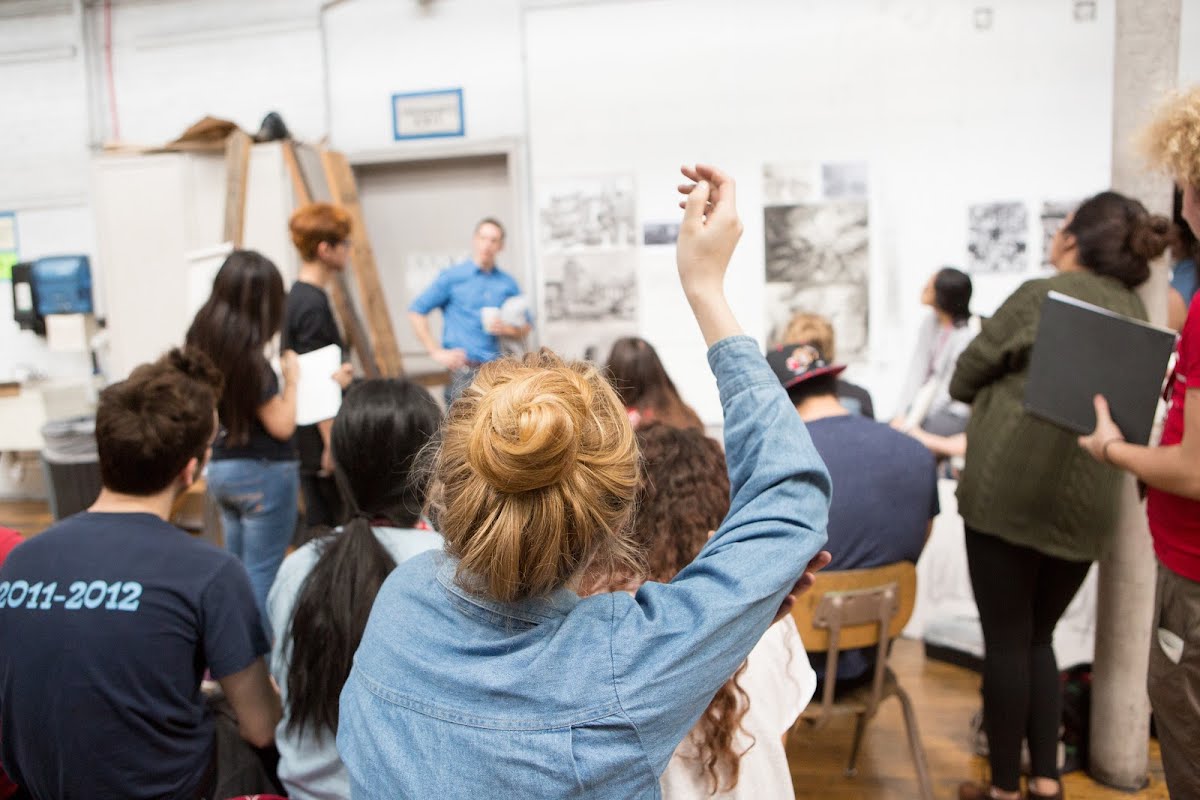